Taxing On Your Heart 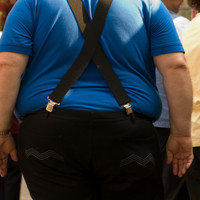 On May 25, 2010, the Center for Science in the Public Interest released its annual XTREME EATING AWARDS.  At the top of the calorie chart was The Cheesecake Factory’s Pasta Carbonara at 2,500 calories and 85 grams of saturated fat.  They added, “That’s more saturated fat than a person should consume in four days.”

Processed foods like pizza, pasta, microwavable dinners, and greasy cheese burgers, chock full of calories, carbs, salt and preservatives of all kinds are shortening our lives and making the ends of our lives more painful and expensive.  This is killing our country.  The trend is unmistakable:

Why do we not reform when these facts are so well known?  There are a number of reasons I can think of.

If I lived in Libertarian-stan, I wouldn’t care as much that 2 out of 3 of my fellow Americans ate themselves into an early grave (although I have to say I am very concerned about my grandkids who have neither will power nor motivation to resist these temptations).  But, I live in ObamaCare-stan instead, which means that no matter how self-disciplined I am, I am forced to help pay for other people’s self-induced illnesses through my taxes.  Costs increased by being overweight or obese include blood-sugar monitors, bypass surgery, angioplasty, ICU time, electric carts and sleep-apnea machines.  But the biggest cost is more doctor visits and lots of very expensive medication, like statins, all of which has side effects (some deadly).

I won’t be around for the denouement, but, according to at least ONE REPORT our kids and their descendants will likely have shorter lives than their ancestors for the first time in American history.  It’s like helplessly watching a train wreck in slow motion.

Should the government protect us from getting too fat?  My first impulse was to advocate personal responsibility, but we have been doing that for years and it is a failure.  It is similar to the problem of tobacco – the addiction is simply too great and biology is against us.  We have lost the battle to educate the populace about something no one really wants to hear, and Mike and Wally need something to write about.

I propose that government do all that it can to fix this, including nutrition labels on menus and a SIN TAX that taxes food in proportion to its unhealthfulness.  After all, we tax cigarettes and alcohol.  Then we could use the proceeds to help rescue Social Security, Medicare and Medicaid.

As a rule, I favor less government and not more.  However, this is one area where I see no alternative solution.  Another is energy.  Instead of sending  our young people to fight and die, we could very simply end our energy dependence on OPEC in a few years by incrementally increasing the federal gasoline tax and using the revenue to repair and maintain our crumbling infrastructure.

This Memorial Day I am hearing a great deal of praise for the fallen from past wars who sacrificed for our common good, but is it just talk?  All it would take to solve these two seemingly intractable problems is the resolve by a majority of Americans, one nation indivisible,  to share the pain equally.  Are we up to it?

8 Responses to Taxing On Your Heart