My conservative blogging colleague, Anson Burlingame, called my attention to an article in todays Washington Post, Origins of the debt showdown. I did find it “instructive”, as he suggested I would. It is a good chronology of how Tea Party enthusiasts began in January 2009 with dismay over President Obama’s inauguration and then organized with increasing strength to eventually produce the recent crisis over the debt ceiling.

The GOP views this as a victory over their foes, Democrat liberals whom they blame for our soaring deficit and national debt. The Tea Party’s enthusiasm has been single-minded and nearly religious in its zeal, and that zeal was powered by a consistent meme among their members: the debt and the deficit are Obama’s fault. But, are they?

The latest Time Magazine (8/15/2011, p. 31) has an equally-instructive cover story, “The Debt Deal’s Failure”. It has an excellent chart of federal spending versus income as a percentage of GDP, broken down by presidential terms. I wish I could reproduce it here, but it isn’t available. The nearest I could find is from Wikipedia showing just the debt but not the income. Still, it is useful. 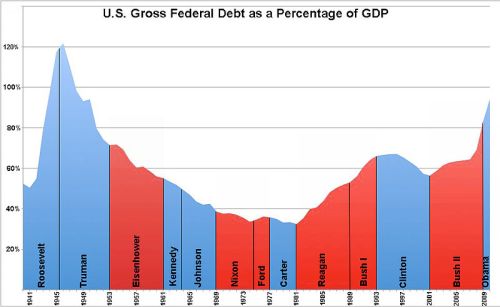 National Debt as a percentage of GDP

If you will look carefully you will see that the slope of the line starting sometime in 2007 to the end is constant and very sharply upward. In other words, the federal debt’s meteoric rise began under the Bush II administration and its momentum continued it into the start of Obama’s. The Time Magazine chart, which is not available, shows more and extends to mid 2011. It shows spending coming down at a good clip starting in late 2009, but more importantly it shows “income”, meaning government revenues, dropping sharply starting in 2007 from 18% to 15% at the end of 2010, thus exacerbating the debt problem. In case you don’t know what that is, it is the Bush II tax “breaks” in action.

The story is clear to me. The debt problem is indeed serious, but the debt-ceiling crisis was manufactured on a false political premise, that it was necessary to curtail spending by Democrats when in fact the debt was due to the bad fiscal policies of the Bush II administration. The Time article describes those policies like this:

Tax hikes and spending restraint under George H.W. Bush and even more so under Bill Clinton brought the problem under control and in the late Clinton years even produced a budget surplus. Then came the George W. Bush tax cuts, expanded health care benefits and two wars–all unpaid for–without any tax increases. The result: the surplus disappeared, and by 2008, the debt had ballooned to $5.8 billion. The final blow was the financial crisis and recession, which meant that federal tax revenues collapsed, followed by more tax cuts and stimulus spending. The debt rose to its current $14.3 trillion.

The article then says this,

So far, the national debate has been built around the fantasy that we do not have to choose between big government and low taxes–that we can get both by cutting waste, fraud and abuse. But the money is in the big middle-class items, from Medicare to the mortgage-interest deduction. With federal taxes at 15% of GDP, a historic low, and spending at 24% of GDP, there is really no conceivable way to close the gap without increasing taxes–either raising rates or eliminating deductions and loopholes. And Republicans might find to their dismay that when forced to choose, Americans will decide that they like their government programs after all. Polls show that the public would rather raise taxes than, for example, cut Medicare. (In fact, we would have to do both.) The public may hate government in theory, but it has warm feelings about most individual government programs, from the space shuttle to Head Start to Pell Grants. This may be why Obama might be happy to have this debate in 2012 and urge a mix of cuts and increased revenues.
Whatever the outcome of the ideological debate, that outcome has to then be translated into public policy. For that to happen, we need a government that works. What the debt crisis has highlighted is that Congress–the heart of day-to-day government–is utterly and completely broken.

All this brings me back to Anson’s article from the Washington Post, “Origins of the Debt Showdown”. It details the interesting turn of events when both Boehner and the President expressed interest in some kind of “grand deal” that would actually do something meaningful about both revenue and entitlements. Here is a part I found especially instructive:

In mid-July, Boehner tried again for a big deal. On Friday, July 15, as Capitol Hill began emptying out for the coming weekend, he invited White House chief of staff William Daley and Treasury Secretary Timothy F. Geithner to his office. With Cantor in the room, Boehner laid out an ambitious plan to tame the debt that would include a rewrite of the tax code that would raise an additional $800 billion over 10 years — the equivalent of letting the Bush tax cuts expire for the nation’s top earners, a key Democratic demand.

On Thursday, July 21, Obama’s senior advisers met at the White House with top aides to Boehner and Cantor. For two hours, they went line by line through the emerging agreement. It felt like they were “very close” to the promised land, a senior administration official said.

That afternoon, Obama called Boehner and gave him a choice: If you want aggressive entitlement cuts, I need more revenue. But if you can’t stomach extra revenue, we can dial back the entitlement cuts and still do something important.

The call went well, according to Democrats in the room. That evening, Obama met with Democratic leaders and told them to prepare for tough cuts to Medicare and Medicaid.

Twenty-four hours later, the deal was dead. Once again, Boehner walked away. Worse, from the administration’s point of view, Boehner’s rhetoric was growing harsher, at times echoing the most uncompromising voices in his new majority.

Administration officials now faced what they saw as a frightening possibility: That the controlling party in the House might be willing to “let the house burn down,” in the phrase bandied about at the White House — unless its demands were met.

Obama’s top advisers, surveying their options, decided to open some doors to compromising on their tax demands. In their view, with flames licking the rafters, House Republicans were not just slamming doors shut. They were locking them.

That’s it. The deal collapsed and an historic opportunity was lost.  Boehner was willing to compromise, Obama was willing to compromise, the Tea Party was not.  In my opinion we are in for a lot more bickering amid the flames, and the core problem is the intransigent ideology of a zealous but misguided minority which prioritizes “victory” above the immediate national interest.  Religious zealots don’t compromise, and I see more than a little religion in the Tea Party’s bag.  Rick Perry seems emboldened as well, does he not?

I used to believe that a strong third political party would be good for the nation. After seeing the Tea Party in action I don’t think that any more.

57 Responses to An Historic Failure