Ray Bradbury was ordinary flesh and blood, but he had a magic mind and there were certain similarities between his life and my own. Born in Illinois to a telephone lineman and his Swedish immigrant wife, Bradbury grew up in Tucson and Los Angeles. His corporeal life was mundane, but his intellectual life was quite otherwise, thanks to the eclectic power of the public library. The occasion of the death of this giant of literature this week caused me to look up his page on Wikipedia and I was struck by this remarkable quote of his:

Libraries raised me. I don’t believe in colleges and universities. I believe in libraries because most students don’t have any money. When I graduated from high school, it was during the Depression and we had no money. I couldn’t go to college, so I went to the library three days a week for 10 years.

He was an autodidact, a person who was a self-taught learning addict, and as such he joins in my memory other of my literary heroes like William Manchester, Winston Churchill, Jack London and Joseph Conrad. It was in the library at UCLA that Bradbury wrote on a rented typewriter the novel that would become Fahrenheit 451, the novel that would make him famous.

Like the immortal Isaac Asimov, Bradbury was a compulsive writer, having committed to writing something every day of his life beginning as a teenager! The New York Times obituary called him “the writer most responsible for bringing modern science fiction into the literary mainstream”, something that he would dispute. Except for Fahrenheit 451, he said that he wrote fantasy.  Now I imagine him a new resident exile on the Mars of his imagination, alongside his literary mentor Poe and all the others.

In my own literary adventures as a kid exploring the Andrew Carnegie library in a small mid-western town, a place redolent of dust, glue and adventure like no other in my memory, I found that Bradbury’s works contained enough elements of science and imagination to make me a solid fan. His and other works of speculative fiction were part and parcel of a magical world that was almost too good to be true, building on the new realities of atomic fission and 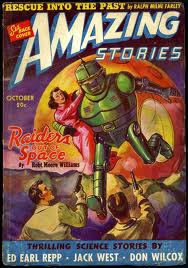 burgeoning technology. There were not only anthologies of science fiction stories, but novels, novellas, and perhaps most interesting of all, pulp magazines, covers emblazoned with sexy babes and bug-eyed monsters. The literature within those covers was, Astoundingly (pun intended), of generally high technical as well as literary quality due to the fact that many of the authors in this Golden Age were real scientists and engineers who knew what they were talking about and based their themes accordingly.

I recall reading with interest a story by Robert A. Heinlein about “waldo’s”, an early description of servo-mechanisms for remote manipulation. Later, when I was being grilled on naval knowledge as a plebe at the Naval Academy, an upperclassman was surprised when I displayed knowledge of servo’s, something he as a senior was just learning about.

Most kids don’t have Bradbury’s self-starting motivation for               learning, but most do have surprising potential, if it can be started. I was powerfully reminded of this by a segment the other day on ABC News about the Harlem Village Academies, charter schools founded on the principle of giving teachers complete control of curricula and reading material, even controversial and imaginative material! What a concept! The only thing preventing the development of myriad new Ray Bradbury’s is the divisive politics that insist we continue boring lock-step, uninspired, ethnically-driven curricula. As a culture we need to get our heads out of the political sand and divorce education from politics. IMHO.