I, like many people, was disgusted with the slaying for “sport” of a semi-tame lion in Tanzania, but I never saw a good articulation of just why the act engendered such strong emotion. Until, that is, when after half a century I recently re-read a fiction story by the great John D. MacDonald. The third in his Travis McGee series, A Deadly shade of Gold contains a commentary on the phenomenon that is as pertinent now as it was when it was written in 1965. 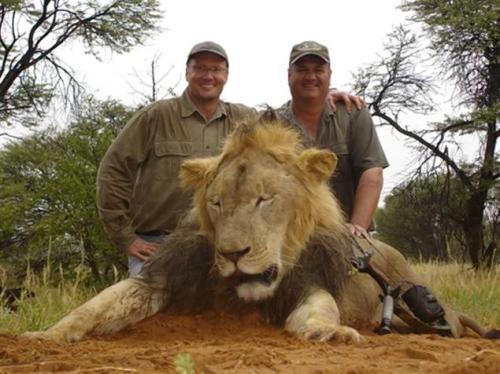 After slaying his wounded lion while surrounded by his $50,000 coterie of trackers and protectors, Walter Palmer is apparently back drilling teeth these days, his notoriety fading even as Cecil’s noble head graces the wall of his den. But the distaste lingers and the coarser elements of human nature endure. Here’s how Travis McGee put it 60 year ago:

I do not like the killers, and the killing bravely and well crap. I do not like the bully boys, the Teddy Roosevelts, the Hemingways, the Ruarks. They are merely slightly more sophisticated versions of the New Jersey file clerks who swarm into the Adirondacks in the fall, in red cap, beard stubble and taut hero’s grin, talking out of the side of their mouths, exuding fumes of bourbon, come to slay the ferocious white-tail deer. It is the search for balls.

A man should have one chance to bring something down. He should have his shot at something, a shining running something, and see it come a-tumbling down, all mucus and steaming blood stench and gouted excrement, the eyes going dull during the final muscle spasms. And if he is, in all parts and purposes, a man, he will file that away as a part of his process of growth and life and eventual death.

And if he is perpetually, hopelessly a boy, he will lust to go do it again, with a bigger beast. They have all their earnest rationalizations about game control. It is good for animals to shoot them. It may serve some purpose to gut shoot them with a plastic arrow. We have so bitched up the various ecologies in all our areas, game control is a necessity. But it should be done by professionals paid to do it, the ones who cherish the healthy flocks, the ones who do not get their charge out of going bang at something with thrice the animal dignity they can ever attain.

I do violate my own concepts by slaying the occasional fish. And eating him. But spare me the brotherhood of the blood sports, the hairy ones, all the way from Macmillan and his forty grouse a day to some snot kid who tries to slay every species of big game in the world, with the assistance of his doting daddy.

There is one thing which strikes me as passing strange. Never have I met a man who had the infantry memories, who had knocked down human meat and seen it fall, who ever had any stomach for shooting living things. I could not imagine Paul Dominguez ever shooting even a marauding crow. He would need no romantic fantasies about himself. His manhood would need no artifical reinforcing.