List of X has done it again. If you still need some perspective on this crazy election, please take refuge in this humor, the last refuge from political insanity! 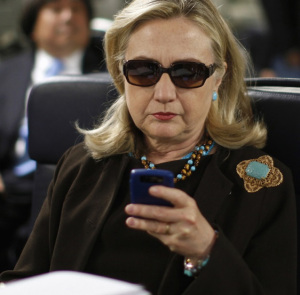 “Note to self: fire James Comey…. Wait… Is this already on Wikileaks?”
@DefinitelyNotARussianHacker: “Da.”
Image source: hacked from AP

Last weekend, there was a new shocking development in the 2016 presidential election: James Comey, head of the FBI, informed Congress that FBI had seized a laptop belonging to serial sexter Anthony Weiner and his wife, top Clinton aide Huma Abedin, and found thousands of emails that may or may not be relevant to the FBI’s investigation of Hillary Clinton’s private email server. Of course, since there are only a few days before election, this revelation has caused a Samsung phone-like explosion, with Republicans once again demanding that Hillary Clinton is immediately imprisoned regardless of the outcome of the investigation, and Democrats blaming the FBI for conspiring with Russia and Wikileaks to help Donald Trump win the election. Here are 10 reactions to the Emailgate and the FBI investigation.